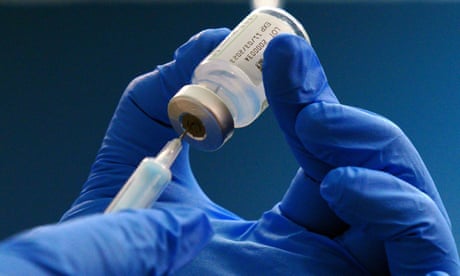 A universal flu vaccine that protects against all strains of the virus could be available in the next two years, according to a leading scientist.

An experimental vaccine based on the same mRNA technology used in the highly successful Covid jabs was found to protect mice and ferrets against severe influenza, paving the way for clinical trials in humans.

Prof John Oxford, a neurologist at Queen Mary University in London, who was not involved in the work, said the vaccine developed at the University of Pennsylvania could be ready for use the winter after next.

“I cannot emphasise enough what a breakthrough this paper is,” Oxford told the BBC’s Radio 4 Today programme. “The potential is huge, and I think sometimes we underestimate these big respiratory viruses.”

Researchers have been working on universal flu vaccines for more than a decade, but the latest breakthrough, published in Science, is seen as a major step towards a jab that could help protect humans from a potentially devastating flu pandemic.

Seasonal flu vaccines, which protect against up to four strains of the virus, are updated every year to ensure they are a good match for flu viruses in circulation. The new vaccine is designed to prime the immune system against all 20 subtypes of influenza A and B, potentially arming the body to tackle any flu virus that arises.

The world last experienced a flu pandemic in 2009 when a virus that jumped from pigs to humans spread around the world. While that outbreak was far less lethal than health officials feared, the 1918 flu pandemic demonstrated how dangerous new strains could kill tens of millions of people.

Giving people a “baseline” level of immunity against the full range of flu strains could lead to far less illness and fewer deaths when the next flu pandemic happens, said Dr Scott Hensley, a researcher on the team in Pennsylvania. Experiments in mice and ferrets found that the mRNA flu vaccine provoked high levels of antibodies that were stable for several months and protective against the virus.

While the results from the animal tests are promising, clinical trials are needed to see whether the vaccine protects humans in the same way without causing problematic side-effects. The vaccine raises questions for regulators around whether to approve a shot that could protect against viruses with pandemic potential, but which have not yet actually emerged.

“This vaccine has only been tested in animals to date and it will be important to investigate its safety and efficacy in humans,” said Dr Andrew Freedman, a reader in infectious diseases at Cardiff University. “It does seem a very promising approach to the goal of producing a universal flu vaccine as well as vaccines that protect against multiple members of other viral families such as rhino- and corona-viruses.”

Adolfo García-Sastre, the director of the Institute for Global Health and Emerging Pathogens at Mount Sinai hospital in New York, said current influenza vaccines did not protect against influenza viruses with pandemic potential. “This vaccine, if it works well in people, would achieve this.”

“The studies are preclinical, in experimental models,” he added. “They are very promising and, although they suggest a protective capacity against all subtypes of influenza viruses, we cannot be sure until clinical trials in volunteers are done.”