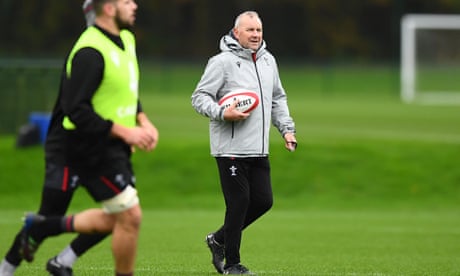 Wales have reloaded with experience after the humbling loss to Georgia by recalling Alun Wyn Jones, Taulupe Faletau, Leigh Halfpenny and Gareth Anscombe for Saturday’s game in Cardiff against an injury-depleted Australia side who have made seven changes to the XV that lost narrowly to Ireland.

The wing Rio Dyer, who made a try-scoring debut against New Zealand this month, was picked ahead of Josh Adams, and Joe Hawkins will make his debut in an all-Ospreys line of inside backs.

An Australia side patched together after a stack of injuries in the narrow loss to Ireland last weekend, meanwhile, includes first Test starts for the fly-half Ben Donaldson and the No 8 Langi Gleeson.

The Wallabies have not beaten Wales in Wales since 2017 and, while their European tour started with a win over Scotland, it has been followed by defeats in France, Italy and Ireland. Just as Wayne Pivac is coming under increasing scrutiny as Wales coach after the 13-12 loss to Georgia, so his Australia counterpart, Dave Rennie, is feeling the heat as the Wallabies seek to avoid a fourth defeat on the bounce.

“We’re well aware of a Wales side that will be looking to respond after last week but we’re equally as motivated to finish our season on a positive note here in Cardiff,” Rennie said. “If you look at wins and losses it will be a poor season. We have had a lot of tight games, and games we should have won. We need to look at that and turn pressure into points at key moments.

“I definitely think we are a better side. We have a lot of firepower to come back in and I have no doubt we can put together a strong side and build on what we have done. We can take belief out of the last few weeks, particularly the performances in Dublin and Paris against really strong sides, but we need to be better.”

Wales have made six changes from the Georgia defeat which means they go into the game against the Wallabies off the back of only three wins from 11 Tests this year. Pivac says he cannot allow himself to be sidetracked by speculation surrounding his future. “Other people make those decisions,” he said.

“What we do internally is make sure we prepare the best we can. I can’t get sidetracked by those sort of things. At the end of the day, it is the professional environment we are in. We know there is a lot at stake, clearly. We are here rolling our sleeves up this week to try and get the result everyone wants.”

Asked if there had been contact with his WRU bosses, Pivac added: “Just the usual. We have weekly contact in every camp, and this week has been no different. It’s just the standard, focusing on the here and now. We review campaigns at the end of the campaign, not during. So it is just standard things discussing what we are doing this week and how we can improve the performance - normal conversations we would have.

“It is very, very disappointing to be in this position. As head coach, the responsibility lies with me for a lot of the decision-making. I don’t shy away from that. What we do is look at what we can control. That has been every day we come in this week, maximising how we get the team right mentally and physically.

“That has certainly been the focus of everyone this week. Players have been very honest in reviews and gone out and been physical in training.”

For Australia, Donaldson, favoured over Noah Lolesio, partners his Waratah teammate Jake Gordon, who starts at scrum-half, with Reece Hodge to operate at inside-centre.

Rennie has only 25 fully-fit players at his disposal after his captain, Michael Hooper, became the latest player to fall by the wayside with concussion. The prop Taniela Tupou is also set to be sidelined for seven months after rupturing his achilles.

Australia produced a spirited response to their embarrassing loss against Italy a fortnight ago – and came very close to upsetting the majority of a sold-out Aviva Stadium crowd – but this has been a sobering tour.

Rennie has also handed Gleeson his first start – replacing the injured Rob Valetini – with Fraser McReight filling in for Hooper at openside flanker.