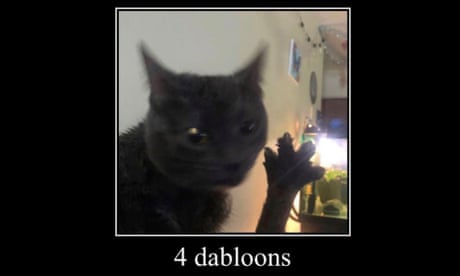 A “dabloon revolution” is taking over TikTok – but what is it and how did we get here?

What is the Dabloon economy?

The dabloon economy is the latest craze engulfing TikTok. It’s a collaborative, loosely structured role-playing game where users collect the fictional currency “dabloons” – based on the 16th-century Spanish coin known as a “doubloon” – and exchange it for imaginary items, such as soup, weapons or a giant shark with a horse head.

You earn dabloons simply by coming across a video giving you some. You will then eventually come across other videos – most featuring a picture of a cat who will greet you with the phrase “hello traveller” who will then proceed to show you their inventory of items that you can buy for a set number of dabloons.

Anyone can make a dabloon gifting or sale video, there’s no database that tracks how many you have or what you buy, and there is no external website that creates or regulates them. In fact, there’s really nothing stopping you from just saying that you have ten billion doubloons in your pretend bank account , but with no tangible benefits besides whimsey, if you choose to cheat, then you’re only really cheating yourself.

“I think the reason we all love this is that we all secretly miss being 5 and playing with our friends,” avid UK dabloon collector Beth Woodward says.

“I miss being a kidnapped princess or a witch making potions. Being a part of this trend means I can do that again. I can be a silly little cat buying silly little items and just having a great time.”

How it this start?

According to the website “Know Your Meme”, the dabloon trend’s origins can be traced back to two images, shared by the Instagram account catz.jpeg, of cat’s paws, with the simple caption “four dabloons” beneath.

This brand of nonsensical humour seemed to strike a chord with the account’s hundred thousand followers, and was shared consistently over the following months.

By October 2022 the phrase, “But it will cost you 4 dabloons” became a popular punchline on TikTok and by late November this had become a full-on craze, with thousands of accounts posting dabloon content and videos using the hashtag “#dabloons” collectively gaining nearly 500m views, as of 25 November.

And thus the dabloon economy began.

How has it evolved?

Suddenly there were dabloon thieves draining people’s accounts dry or sending them spiralling into dabloon debt. Obviously, the dabloon kangaroo then needed to be invented in order to fight the robbers off. Next, the mafia and pirate leagues formed, so naturally, fighter jets and dragons were added to the economy to up players’ defences and ward off rival factions.

Most tracked their dabloon count in their phone’s notes app, but within a day or two, the economy became so complex that collectors such as 21-year-old Allexis Dorsey needed a spreadsheet to record her income.

“It ended up with me and my roommate, sitting there for like four hours … playing with our spreadsheets,” she said.

A TikTok her roommate posted of Dorsey explaining her in-depth accounting system went viral and the trend soon caught on – some users even attempting to code their own dabloon tracking apps from scratch.

What is the inflation problem?

But very quickly people began to notice an issue with this imaginary economy where anyone and everyone has the power to mint their own coins.

“It started as a fun little way to get soup, cakes, and maybe a blanket. It quickly spiralled into massive inflation,” Woodard laments.

“People were giving out infinite dabloons and such … I saw someone selling a bowl of soup for 10 dabloons! What happened to 4?”

So, in an attempt to reinstitute order users began developing rules, such as capping the maximum dabloons bequeathments to 100 per video. And soon the dabloon FBI and IRS were created.

“This is a very cruel lesson that we’re all learning about our nation’s economic state,” Dorsey says, speaking from home in the United States.

“I mean, we see some of the same issues that we’re literally facing right now in our actual economic climate.”

But some, such as Woodard are horrified by the ever-growing grip of the (imaginary) dabloon government.

“I hate that people introduced late-stage capitalism into this beautiful world,” they say. “To be honest, it’s why I joined the revolution.”

Yes, barely a week into its conception and the dabloon economy is already condensing with a full-blown anti-capitalist revolt.

“We have a secret base where the revolutionaries gather, and we’ve been collecting resources and weapons to prepare. Some have donated their fighter jets, guard dogs, armour, and recently some dragons.”

But ideology, and factional rivalry aside it’s clear that what unites the participants of the dabloon economy is the sheer joy of collectively creating this gigantic imaginary world.

“It’s very whimsical,” Louis Massey, a London-based teacher said, already jotting down the updates he needs to make to his classroom whiteboard dabloon tally in the morning.