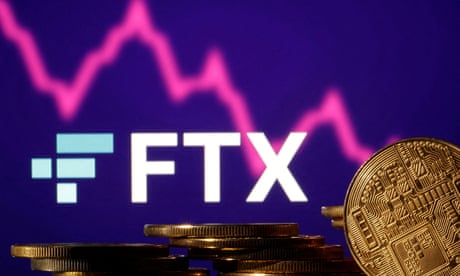 The collapse of FTX, one of the world’s largest cryptocurrency exchanges, has unleashed another bout of volatility in the highly speculative digital asset market. The fortune of FTX’s founder, Sam Bankman-Fried, went from nearly $16bn to zero within days as his crypto empire filed for bankruptcy protection in the US on 11 November. Here we answer some of your questions about the story so far.

How was FTX structured and what was its business model?

In corporate terms, FTX was a chaotic web of more than 100 different companies, all united under the common ownership of Bankman-Fried and his co-founders, Gary Wang and Nishad Singh. In a bankruptcy filing, John Ray III – an American bankruptcy specialist who previously oversaw the collapse of Enron – described it as four main “silos”: a venture capital arm, which invested in other businesses; a hedge fund, which traded crypto for profit; and two exchanges, one supposedly ringfenced and regulated for the US audience, and one international exchange where the rules were much freer.

The revenue streams were as diverse as the business, but the core of the group was the exchange. Most people buy cryptocurrency by transferring money (“fiat”) to an exchange like FTX, which operates like a bureau de change, trading currency pairs at a floating exchange rate. FTX’s regulated exchange offered that service, and the company took a cut of every transaction, but the big bucks were in the much more aggressive trading on the international exchange, where traders would try to profit from swings in the prices of crypto assets, borrowing money to increase their potential earnings (or losses). The more complex the trade, the bigger the cut.

Why did it collapse?

In the short term, because of a token called FTT. This was effectively a share in FTX, that the company issued itself and promised to buy back using a portion of its profits. But documents leaked to news site CoinDesk suggested that Alameda, the group’s hedge fund, was using FTT to make risky loans – effectively trading using company scrip. The revelation prompted a major holder of FTT, rival exchange Binance, to declare it was selling its holdings, prompting a run on the exchange as other customers scrambled to withdraw their funds.

In the medium term, it collapsed because of deeper issues to do with the link between FTX and Alameda. The exchange didn’t have the ability to accept wire transfers, so customers would send money to Alameda, and FTX would credit their accounts. But the actual money was never passed on: three years later, Alameda had kept hold of, traded with, and frequently lost, $8bn of FTX customer funds. When the run on the exchange started, FTX couldn’t find the money it thought it had, because it had never taken it.

In the long term, FTX failed because the company was a mess. “Never in my career have I seen such a complete failure of corporate controls and such a complete absence of trustworthy financial information as occurred here,” said Ray, the bankruptcy specialist.

What does FTX’s fate tell us about cryptocurrencies?

Within the sector, different conclusions have been drawn. Some have argued the collapse is a triumph for “decentralised finance”, or DeFi, which uses computer code to build versions of financial services that don’t rely on trust or a central party. The head of a DeFi exchange can’t buy a $40m penthouse with customer funds because there is no head.

But outside the sector, the conclusion is plain. Cryptocurrencies are a bet on the idea that a world where government power over money and finance is ended would be a better one: the collapse of FTX is perfect evidence that actually, government regulations over finance are pretty useful.

Will people get their money back?

Some people will get some money back, but no one is going to get everything. Even Bankman-Fried is convinced that it would take an $8bn injection of capital to make every depositor whole. But the accounts presented by Ray make clear that is wishful thinking. There isn’t even a single document detailing all the company’s depositors, he says, and while the balance sheet suggests a healthy mixture of assets and liabilities, “I do not have confidence in it and the information therein may not be correct as of the date stated”.

Robert Frenchman, a partner at New York law firm Mukasey Frenchman, said FTX customers in the US whose money is trapped in the failed business will have to join a queue of creditors because there are no special protections for customers of unregistered crypto firms like FTX.

“There is no backstop here for customers in the US, unlike for bank or brokerage account holders. The customers will have to fight it out with everyone else because they have no special protections. They go into this process as individual creditors, or as a group of creditors if they band together, who must battle it out with legions of other creditors, large and small.”

In the meantime, the US attorney’s office for the southern district of New York is reportedly looking into the case and US treasury secretary, Janet Yellen, has said that crypto markets need more robust oversight.

Could there be contagion within the crypto markets?

There have already been signs of a spillover effect. BlockFi, a crypto lender rescued by FTX in the summer, has paused customer withdrawals, admitting that it has “significant exposure to FTX”. On Wednesday, the crypto exchange Genesis “made the difficult decision to temporarily suspend redemptions” from the company’s lending business after a series of withdrawals from the service.

This week the chief executive of the Singapore-based crypto exchange Crypto.com said his firm would prove wrong all those who said the platform was in trouble, adding that it had a robust balance sheet and took no risks. Kris Marszalek made the statement after investors questioned the transfer of $400m-worth of ether tokens from Crypto.com to another exchange called Gate.io on 21 October. Marszalek said the transfer was an error and the ether tokens had been returned to the exchange.

Crypto market watchers expect more instability, although the core crypto asset, bitcoin, has held up this week by staying broadly flat at about $16,700.

Teunis Brosens, head of regulatory analysis at Dutch bank ING, said the crisis would “surely deepen” the latest crypto winter, which has resulted in the value of the crypto market falling from $3tn last year to less than $1tn now.

“In terms of prices, we saw bitcoin quite stable around $19,000-$20,000 for months. I’d consider it likely that we will now be seeking stability at lower levels – but first, the storm has to subside, and we are definitely not there yet.”