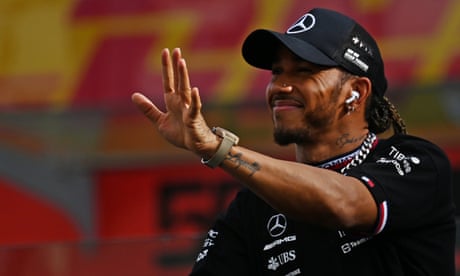 The Mercedes team principal, Toto Wolff, has paid tribute to Lewis Hamilton’s role in maintaining team morale and being determinedly positive despite the team’s poor performance this year. Wolff also insisted Mercedes had taken steps to pull out of their slump but warned that a return to the top would be no easy task.

Hamilton closed out the year with a mechanical failure in the season finale Abu Dhabi Grand Prix on Sunday. The race was won with ease by Red Bull’s Max Verstappen, who had already clinched his second world championship.

For Hamilton it was the end to a season to forget with a car that has been off the pace. He has failed to win a race, losing his record as the only driver to have taken a victory in every season he has competed in F1 and finished sixth in the title race, his lowest standing in 16 years of racing.

Yet Wolff emphasised how crucial the seven-time champion’s strong character has been this year for the beleaguered team.

“For me knowing him for 10 years from a personal side, he was exceptional,” he said. “Better than all the performances in the car, his attitude and mindset this year was outstanding. He has held us up at times, kept the energy level up when it was down even on days where it was difficult for him.”

Mercedes won only one race this year, Hamilton’s teammate George Russell taking the flag at the penultimate meeting in Brazil. They finished third in the constructors’ championship behind Red Bull and Ferrari, the team’s lowest finish since 2012.

Mercedes had won the previous eight constructors’ championships in a row, enjoying an unprecedented period of dominance. However, no teams are immune to falling away after reaching such heights. Ferrari have not won a drivers’ championship since 2007 and Red Bull failed to take a title from 2013 to 2021. Having dropped so far from the two leading teams this season under the new regulations, Wolff said Mercedes had been actively examining the causes to avoid a similar fate.

“We are analysing what were the reasons in the past that teams that dominate over an era suddenly lost performance,” he said. “You can trace it back quite well, a change of regulations, people leaving, a tyre changing fundamentally. We have the same organisation, the same capability and the same financial funding. The regulations changed, we got it wrong but all the other pillars are still in place.

“I am 100% sure that this was a difficult year that was necessary for us to re-motivate and re-energise the organisation. We won eight times in a row, more than 100 race wins. This has made us come back down to the ground to make us appreciate how it feels when you win, as in Brazil. In a few years we will be looking back and saying that was absolutely necessary.”

Nonetheless Mercedes have a long way to go in the close season. They lost months of development time on their car this year as they had to focus on fixing its porpoising and bouncing issues. They believe they are now on the right track for the 2023 car but Wolff sounded a cautionary note as this season closed at Yas Marina.

“I’m not sure at all whether we can bounce back to a position where we can compete for the championship next year,” he said. “You need to acknowledge that the competition is strong but we will do everything in our power to set our objectives high and try to reach them.”