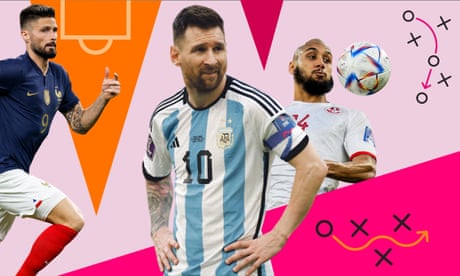 Argentina and Mexico go back a long way. All the way to the very first World Cup. They met in the 1930 group stage and it was quite the match. Three penalties were awarded, two of them scored by Mexico, one missed by Argentina, yet amazingly that wasn’t the main story. Step forward Guillermo Stábile, who notched a hat-trick for La Albiceleste on debut. Argentina won 6-3 and Stábile kept rattling them in all the way to the final, in which he put his side 2-1 up before Uruguay stormed back to win.

Then there was 2006, when everyone banged on about the 25-pass move finished off by Esteban Cambiasso against Serbia and Montenegro as being goal of the tournament. Glorious and all, but it wasn’t even the best goal scored by Argentina at that World Cup: Maxi Rodríguez settled a to-and-fro mini-classic last-16 rubber against Mexico by chesting down a crossfield pass and lash-looping a ferocious volley into the far corner, and there we have it. Sorry Esteban, close but no cigar. Elegance and ultraviolence in equal measure: nobody does it quite like Argentina.

They faced Mexico in the last 16 again in 2010, Carlos Tevez heading home when clearly miles offside, the crucial opening goal of a controversial 3-1 win. On the pitch, a slightly underpowered Lionel Messi; in the dugout, Diego Maradona. Germany spanked them 4-0 in the quarters.

Still, that’s three wins out of three for Argentina, who love to meet the Mexicans at the World Cup. They even enjoy visiting: while they were going through a transitional phase in 1970, missing out on the greatest World Cup of all, they secured an invite 16 years later and El Diego made the Azteca his own for ever. (Well, he gets a share of the lease with Pelé, at least.)

Old results shouldn’t influence the present, not logically, but they invariably do. So all of this ancient history will give Argentina succour going into their latest World Cup fixture with Mexico, a match they really could do with winning, and certainly can’t afford to lose. Despite their orbit-bothering defeat by Saudi Arabia, they were still only a few inches here, a couple of centimetres there, away from a four-goal first-half haul. There’s misfiring, and then there’s misfiring, and so a Mexico side that struggled to make any memorable impact against a workaday Poland –­ and were dependant on Robert Lewandowski missing from the spot for their point – should hold little fear for Argentina. After all, up until Tuesday lunchtime, they were the tournament favourites.

Football doesn’t quite work like that, of course. So if Messi really is to fill that one bulbous gap on his resumé, he’ll need to dig deep down for another big Mexico-slaying contribution in the manner of his esteemed forefathers Guillermo, Maxi and Carlos. A hat-trick? A blistering volley? An extremely dubious effort allowed to stand by incompetent officials? With the pickle Argentina are in, they can’t be fussy, any of those will do. SM

Qatar’s hopes turn to dust
Six minutes into this World Cup there was a queasy feeling that Qatar’s progression through to the last 16 was, let’s say, getting a leg up. Ecuador’s Enner Valencia had scored with what looked a perfectly good header, but the VAR decision was (technically) correct. However, the early signs that Qatar were hopeless swiftly proved on the money too. The hosts didn’t muster a shot on goal until their second game and that ended in defeat too, a 3-1 loss to Senegal. With the Netherlands drawing 1-1 with Ecuador later in the day, Qatar’s worst nightmares were confirmed. Six minutes in there was hope. Six days later they were out. You can pull all sorts of stunts to award a World Cup to a country. But you can’t magic them into being a decent team. DT

Impressive Iran regain dark horse tag
Argentina’s loss to South Korea and Germany’s late capitulation against Japan were the standout bona fide shocks of the first wave of games. But, on the ‘No One Saw That Coming Scale’, England’s 6-2 victory over Iran was surely on an equal footing. While shrewdies muttered to anyone in earshot that Carlos Queiroz sides don’t concede six and that Iran are actually 20th in the Fifa rankings, thank you very much, Welsh fans had their hopes up for Friday’s meeting. It took a while, until very late in stoppage time, but Iran were dominant, fully deserving their 2-0 win. That’s four goals in two games and they’ve also rattled the woodwork three times. The England result is likely an outlier. With a well-organised defence and enough attacking verve to cause defences problems, their pre-tournament status as awkward dark horses looks justified again. DT

Fifa has been accused of a “sinister abuse of power” in the OneLove armband row by the anti-racism organisation Kick It Out. The captains of seven nations, including England and Wales, had been due to wear the rainbow-coloured anti-discrimination armbands at the World Cup in Qatar, a country where same-sex relationships are criminalised, but fears players would be exposed to “unlimited liability” and suspensions forced teams to abandon the idea. Responding to this news, Sanjay Bhandari, the chair of Kick It Out, said: “What Fifa did is beyond failing to live their values and is a sinister abuse of power designed to silence – hence the German gag protest. I guess if you hang around with autocratic dictators long enough, you start picking up some of their habits.” And here’s Cold War Steve, in the first of a special series of Qatar 2022 themed artworks by the celebrated visual satirist, on the victims and vanity of this World Cup. GB

Richarlison has been praised in Brazil as much for his progressive politics as the unstoppable scissor kick that launched his nation’s campaign in Qatar. “[He] is the idol Brazilians deserve after so much suffering,” the sports journalist Talyta Vespa wrote on Friday in one of many tributes to the player’s off-field activism and charity work. The Guardian’s Tom Phillips points out that Richarlison – or the Pigeon, as fans know him, thanks to his avian-style celebrations – has repeatedly spoken out on topics such as racism, poverty, police and gender violence, LGBTQ+ rights and environmental destruction. “Richarlison represents a more loving, more affectionate side to the Brazilian seleção,” said Juca Kfouri, one of Brazil’s top football writers. “He’s seen as being a citizen who actually cares about Brazil.”

And come on, who had money on Enner Valencia to be one of the contenders in the race to be top scorer after two matches? But back in his homeland the newspaper El Comercio is singing the his praises. “Superman”, they call him, and ask the question: could he win the Golden Boot outright? GB

There was a lot of love for the Wales fans at the Ahmed bin Ali Stadium as they stayed behind to applaud the Iran players who had just broken their hearts. It’s hard to imagine the strain the Iranians were under after their silence during the national anthem in the England game had put them firmly in the crosshairs of the authoritarian regime at home, but the Red Wall gave Team Melli a rousing reception in visibly stirring scenes. There was no such love for Dean Saunders, though, who was very quickly trending on Twitter after his overly emotional commentary on TalkSport, which included gems such as comparing Joe Rodon to Bobby Moore and predicting that Kieffer Moore could score a hat-trick. GB

Tunisia v Australia (Group D, 10am GMT, BBC One) After an entertaining stalemate against Denmark in their opening match, Tunisia face a side who got a thorough Girouding against France. Jalel Kadri’s team look sharp, so this could be a dangerous game for the Socceroos. Before the tournament, the Tunisia coach said: “If we do not reach the knockout phase, I will leave. I have a contract based on results and being eliminated from the group stage will be a failure for me.” Tunisia have never gone beyond the group stage, so it was quite the statement. WM

Poland v Saudi Arabia (Group C, 1pm GMT, ITV) Having caused the biggest upset of the tournament so far against Argentina, plucky underdogs Saudi Arabia – a framing which feels deeply wrong for some reason – have already made their mark. Next up they face Poland, who played out a messy goalless draw with Mexico. Lewandowski is still to score at the World Cup, having failed from the spot against El Tri. Will he right that wrong against the Saudis? Or will Lionel Messi’s vanquishers score another unlikely victory? WM

France v Denmark (Group D, 4pm GMT, ITV) Having featured in every game at Russia 2018 but failed to score a goal, or even register a shot on target, it was quintessential Olivier Giroud to win the World Cup and end up being compared to Stéphane Guivarc’h. The truth is that Giroud was excellent, his deceptively elegant link-up play allowing Kylian Mbappé and Antoine Griezmann to shine. Nonetheless, with two goals against Australia, Giroud has already outdone himself. France’s mighty go-kart will be looking to add to that tally against Christian Eriksen and co, but this could be a tricky assignment for the reigning champions given that Denmark beat them home and away in the Nations League. WM

Argentina v Mexico (Group C, 7pm GMT, ITV) If Messi exits this World Cup at the group stage, the organisers will probably be more upset than they have been by any of the numerous controversies that have unfolded over the first week. He may be 35, but Messi is still one of the faces of the tournament: his image is plastered across billboards, projected on to buildings and emblazoned across shirts, flags and banners across Qatar. After what happened against Saudi Arabia, it feels like anything could happen here. WM

Aïssa Laïdouni An energetic presence during Tunisia’s draw against Denmark, Laïdouni may find that this World Cup is a springboard to bigger things. Having played for Ferencvaros in Hungary since 2020, he has developed into a calm and mature midfielder away from the glare of Europe’s “big five” leagues. He set the tone for Tunisia’s performance against the Danes with a flying tackle on Christian Eriksen, leaping up, punching the air and beating his chest in the aftermath. If Australia are going to keep their World Cup hopes alive, they will have to get past him.. WM

Spare a thought for school teachers across Wales on Friday. Having allowed children to watch the match against Iran at 10am, one can only imagine how hard it was to get the heartbroken kids to focus on their work after watching that finish in added time. Such agony is hard to get out of the system; perhaps the post-lunch learning could go down as one long life lesson. GB